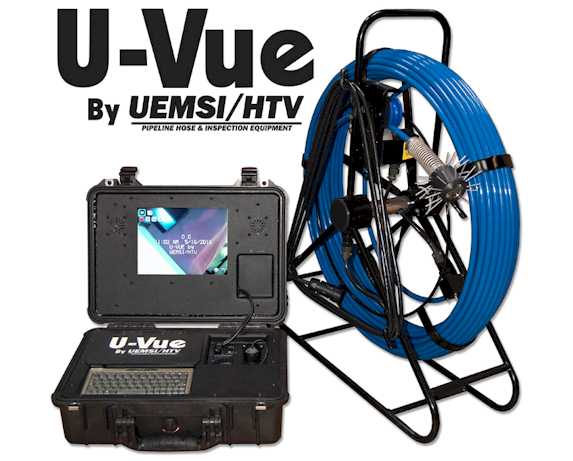 NEW for 2016, the U-Vue® by UEMSI/HTV® is a color push camera system that revolutionizes UEMSI/HTV's already highly-respected product line.

The U-Vue is American made and will soon become the industry standard for quality and durability. Having ‘backwardsrsquo; compatibility, the U-Vue will work with almost any UEMSI/HTV push reel and camera head from the past 26 years.

With features like a Pelican™ case housing the monitor and control unit, a touchscreen DVR that records to a USB thumb drive or SD card, and available Wi-Fi for transferring files to a smart phone or tablet, you will have a system like no other.

Best of all, the entire monitor and control unit assembly is water resistant, so it can be used in wet weather without concern.

U-Vue: Equipped with everything in “Standard Features.”

U-Vue Ultra: Equipped with everything the U-Vue has, plus the Data Display III package.

Data Display III Package: This package includes a mini-keyboard to add on-screen text, and an on-screen digital footage counter. Footage is accurately measured using a measure wheel instead of being calculated by reel revolution. This package is standard on the U-Vue Ultra.

MADE IN THE USA

Pelican™ is a trademark of Pelican Products, Inc.

To learn more about how we can expedite the repair and upkeep of your commercial or industrial equipment, or to get a free estimate on any of our services, call Rochester Industrial Services Inc today at 888-349-4638, or write to us through our website’s contact page.

All content provided on this website is Copyright 2002-2022 © Rochester Industrial Services, Inc. All rights reserved.
RIS is only registered as a sales tax vendor in the State of New York.  As a result, you may be liable for use tax on this purchase in your state if you have not provided RIS with a sales tax exemption certificate.